Fate of IBM Building in the News 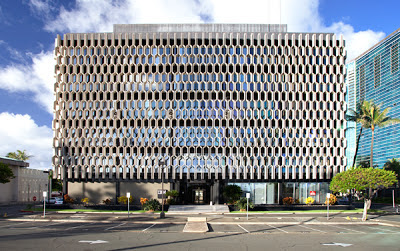 The fate of a Honolulu icon, the IBM Building, designed by Vladimir Ossipoff, was discussed in the local media with opposing spins. Honolulu Star-Advertiser reporter, Andrew Gomes reported on February 1, 2013 that the Howard Hughes Corporation, IBM's owner, and developer of the ambitious redevelopment plan of Ward Villages, will "...get a $20 million makeover, though the name and general look of the 51-year-old building in Kakaako will remain the same." On the other hand, Curt Sanburn's story in the Honolulu Weekly (Feb. 20, 2013) is more skeptical. Sanburn's story reveals   concerns about the renovation design as expressed by a group of local architects. Good start by Hughes to save IBM, but why not truly PRESERVE it - with 21st century building envelope and systems upgrades - as a historical landmark, collect the deserved tax incentives, and kudos from citizens  who appreciate its distinct architectural form as crafted by its original architect? Like it or not, one can argue that this building is an urban memento to Hawaii's heady Camelot days; similar to what the Aloha Tower is to the steamship era of the 1920s-30s. DSA thanks Andrew and Curt for their reporting on this critical issue. Mariko Reed photo above.

See Gomes' Star-Advertiser story and images of the planned renovations at: http://www.staradvertiser.com/businesspremium/20130201_IBM_Building_once_fated_for_razing_to_be_remodeled.html?id=189330911