DSA is hoping to use the linear pavers depicted in the video above for the final stretch of the Farmington Canal Greenway that it is currently designing.  Test subject Kai Sakamoto demonstrates that the paver can provide a comfortable riding surface for a standard wide-tire bike.


Although this choice of material is a big improvement over the steel grating that was originally considered for the riding surface, there is still a question of whether the grooves between the pavers might make cycling with thin racing bike tires difficult.


Cyclists, let us know what you think.


Note: those wishing to try out the paver for themselves should visit Kroon Hall at 195 Prospect Street, New Haven, CT
Posted by Dean Sakamoto Architects LLC at 6:04 AM 5 comments:

The Yamasaki Associates designed Lambert-St. Louis International Airport took a direct hit from the tornado last Friday. Remarkably, both the terminal and the architect's legacy remains intact! Yamasaki (1912-1986), a self-made nisei born in Seattle, was one of America's top architects at mid-century and was also the designer of the ill-fated World Trade Center in New York City. He was shunned by critics as an architectural "decorator" and remains nearly forgotten today.  However, the resilience of his Lambert Airport design proves otherwise. Yama's Michigan Medical Group Building in Lansing, MI (b. 1961) is pictured below. What do you think? 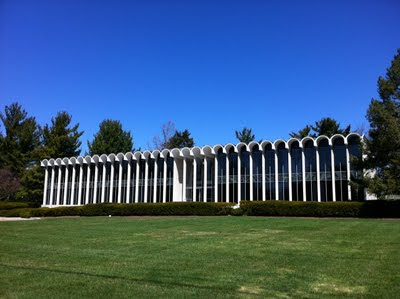 Also see yesterday's Times story in which Gyo Obata of HOK reminds us of the significance of Lambert Airport: http://www.nytimes.com/2011/04/25/us/25stlouis.html
Posted by Dean Sakamoto Architects LLC at 10:56 AM 1 comment:

Posted by Dean Sakamoto Architects LLC at 11:59 AM No comments: