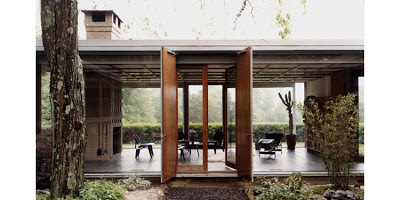 The Modern House Renovation for Dr. Lauren Cohn in Woodbridge, Connecticut was the recipient of a 2012 AIA Connecticut Merit Award. A masterpiece of mid-century modern design which was originally designed by Yale architecture professor King-Lui Wu (1918-2002) for Benjamin Dupont and built in 1952. DSA's primary objective was to retain the identity and character of King-Lui Wu's architecture, yet update and improve artificial lighting and worn finishes, while "softening" the acoustics and areas of everyday activity such as the kitchen, living room and master bedroom. Lighting designers Atelier Ten and the Westmount Group, builders of the project were key collaborators. Vicky Sambunaris photo above.

Other firms honored in this year's program include Pelli Clarke Pelli, Centerbrook Architects, Newman Architects, Joeb Moore and Partners, and Beinfield Architecture.
The design jury consisted of architects Deborah Berke, FAIA, Hillary Brown, FAIA, and David Helpern, FAIA.
Jury comments:
This remodeling project keeps the spirit of the original building. The changes that were made were sympathetic and respectful to it.

For more info on this project see http://www.dsarch.net/projects/cohn.html